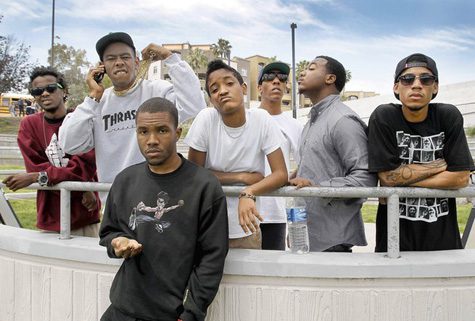 Hip-hop newcomers Odd Future, whose members Mike G., Tyler, the Creator, Frank Ocean, Syd the Kid, Left Brain, Domo Genesis, and Hodgy Beats are pictured above, steal the spotlight in this Sunday’s Los Angeles Times. The much-buzzed-about Cali collective has reportedly been fielding offers from major labels including Bad Boy and Roc Nation, but insists they won’t let money get in the way of their music.

“I always wanted to sign to Interscope when I was a kid because it was the label of Dr. Dre and 50 Cent. I want a boat. I want a Grammy,” said leader Tyler, who will release his commercial debut Goblin on May 10. “But I’d never sign a deal without 100% creative control. You lose a lot when you sign with the major labels. I’d rather be broke than have to rap over the same chord progressions as everyone else.”

All eyes will be on OFWGKTA when they perform at the Coachella Music and Arts Festival in Indio, Calif., this Friday.