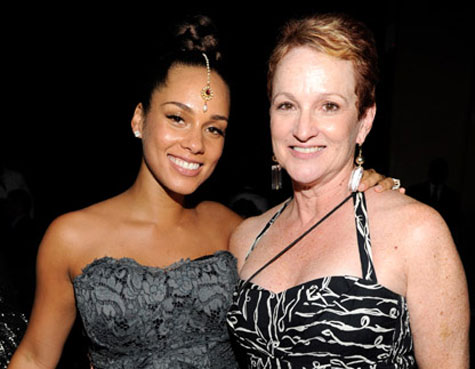 Just in time for Mother’s Day, Alicia Keys is expressing her gratitude to the most important woman in her life. The “Fallin'” songstress has penned a song for her mother Terri Augello on her forthcoming album.

“In the past, I’ve written mostly from my own perspective. But I just wrote a song for my next album that was inspired by a conversation I had with a man who was expressing how indebted he feels to God,” Alicia told Essence magazine. “He said, ‘I owe God.’ Now, what an interesting thought. And as much as I believe in God, for me that translated into how much I owe my mother for who I am. So I went home and I wrote ‘I Owe You.’ It’s dedicated to her.”

The 30-year-old is in a new space following her marriage to Swizz Beatz and the birth of the couple’s son Egypt. “I was very closed for a long time. But I feel so open now,” she added. “To feel open like this means you’ve found the center in yourself. You’re not hiding; you’re not worried about anything. Everything’s going to be just fine.”

Her longtime producing partner Kerry “Krucial” Brothers has been in the studio with the new mom working on her as-yet-untitled project. “The writing is the same,” he told staging-rapup.kinsta.cloud. “The only thing changed is the schedule. We leave earlier now. No more to-the-crack-of-dawn stuff—at least not for now.”

Before her new album arrives, Alicia will release a 10th anniversary edition of her groundbreaking debut songs in A minor on June 28 and host the 3rd Annual Keep a Child Alive Black Ball in London on June 15 with co-host Mark Ronson, plus a performance from Tinie Tempah.