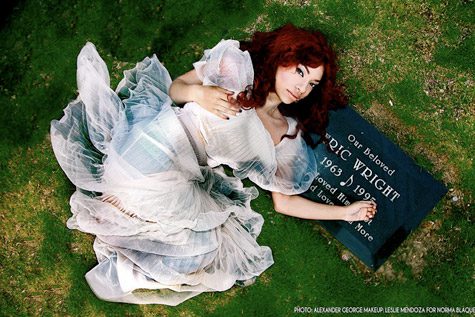 To commemorate the 17th anniversary of his death, Eazy-E’s daughter Erin “E.B.” Wright pays homage to her father in a new photo shoot. The 20-year-old, who is following in her father’s musical footsteps, poses beside his grave and recreates the iconic covers of the West Coast legend’s 1993 album It’s On () 187um Killa and 1995’s Str8 off tha Streetz of Muthaphukkin Compton.

“It’s been 17 long years since my father passed away and I miss him dearly,” said E.B. “This year I decided to pay homage to him by recreating two of his most famous album covers. I feel so proud to be a part of his history. Hopefully one day he will finally get the recognition he truly deserves for his impact and accomplishments that paved the way for so many artists and urban music moguls of today. I love you dad, R.I.P.”

See the striking images and compare them to the original covers below.