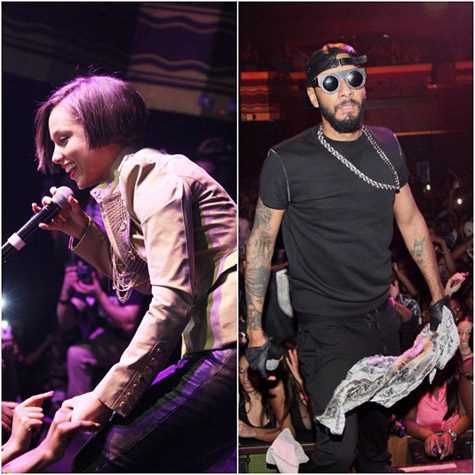 It’s showtime! Swizz Beatz brought out some of his superstar friends during “Girls Night Out” at Webster Hall in New York City last night. The super-producer was joined onstage by Diddy (“Same Damn Time”), Busta Rhymes (“Put Your Hands Where My Eyes Could See”), DJ Khaled (“All I Do Is Win”), and his wife Alicia Keys, who surprised him in the middle of “Everyday Birthday.”

“You just gonna pop up on my show like that?” said Swizz, to which Alicia replied, “I just figured I’d come say hi.”

She stuck around to perform her Girl on Fire single “New Day,” which her husband helped produce.

Watch some of the highlights below.