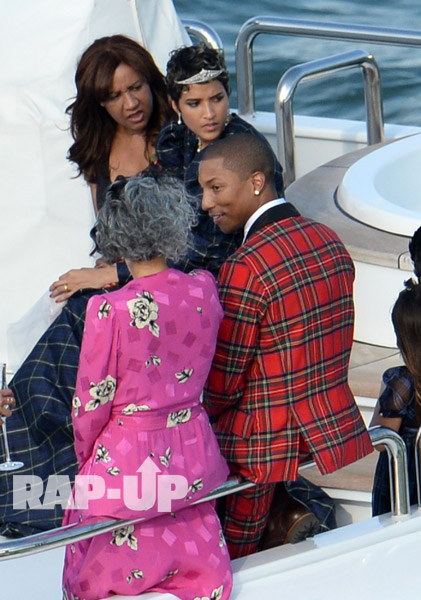 Pharrell Williams tied the knot with Helen Lasichanh at a private ceremony in Miami on Saturday. The Neptunes producer, 40, and model-designer boarded a yacht called “Never Say Never” with their closest friends and family for a portrait session with Terry Richardson.

The groom looked sharp in a tartan tuxedo, while the bride was beautiful in a blue plaid gown and tiara. They later reportedly exchanged vows at the Kampong National Tropical Botanical Gardens.

Usher and Busta Rhymes serenaded the couple with their hits at the reception. “It was so fun. The little concert was amazing. It [was] the most fun wedding I’ve ever been to,” a source tells Us Weekly.

It was previously reported that the couple wed in a secret ceremony in France in August, but according to PEOPLE, they celebrated their commitment to each other on Saturday.

“It’s awesome,” Pharrell previously told the “Today” show’s Savannah Guthrie of his relationship with Lasichanh. “I can’t tell anyone what to do. I can’t give anyone relationship advice. But the bestie thing is awesome. Every night is like a sleepover.”

The couple has been together for over five years and has a four-year-old son named Rocket.