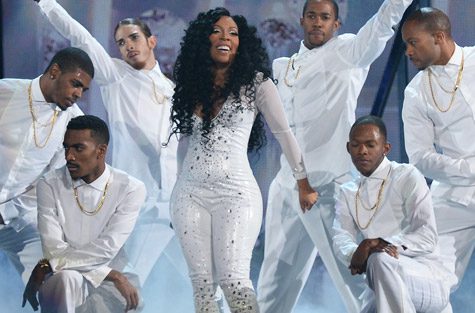 There were tears, tributes, and plenty of thrills when the Soul Train Awards 2013 aired last night on BET and Centric. Hosted by Anthony Anderson, this year’s show paid homage to the soul soundtrack of the ’90s, with performances from today’s brightest stars and the legends before them.

Jennifer Hudson kicked off the two-and-a-half hour show at Las Vegas’ Orleans Arena with her new single “I Can’t Describe (The Way I Feel),” accompanied by Evelyn “Champagne” King, Chaka Khan, and T.I.

An emotional Tamar Braxton picked up two awards for Best R&B/Soul Female Artist and the Ashford and Simpson Songwriter’s Award and later performed a medley including “Love and War,” “The One,” and “All the Way Home.”

Lifetime Achievement Award recipient Keith Sweat brought down the house with a medley of his greatest hits including “Make It Last Forever,” for which he was joined by Faith Evans.

Slick Rick, Warren G, Dougie E. Fresh, and Big Daddy Kane brought back memories with an old school hip-hop medley, while the “Blue-Eyed Soul” set starred Jon B., Bobby Caldwell, Dave Koz, and Vanilla Ice, who had the crowd in its feet with “Ice Ice Baby.”

Other big winners included Kendrick Lamar (Album of the Year), Janelle Monáe (Video of the Year for “Q.U.E.E.N.”), Robin Thicke (Song of the Year for “Blurred Lines”), and Ashanti (Best Independent R&B/Soul Performance for “Never Should Have”).

Watch highlights from the show below.

Jennifer Hudson, Chaka Khan, and Evelyn “Champagne” King Perform “I Can’t Describe,” “I’m in Love,” and “Do What You Feel”

Tamar Braxton Performs “Love and War,” “The One,” and “All the Way Home”

Jon B., Bobby Caldwell, and Dave Koz Perform “They Don’t Know” and “What You Won’t Do”