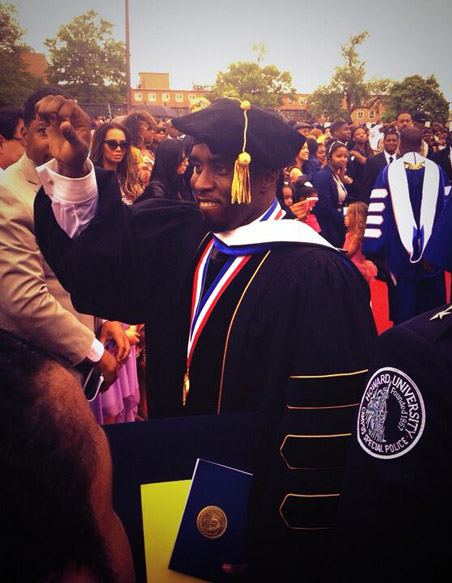 Sean “Diddy” Combs can add Dr. to his résumé. The hip-hop mogul received a honorary doctorate degree in humanities from his alma mater Howard University.

The 44-year-old, who dropped out of Howard after two years in 1990, delivered the university’s 146th commencement address on Saturday in Washington, D.C.

“Ain’t no homecoming like a Howard homecoming,” said Diddy, dressed in a cream-colored suit and shades. “And it feels so good to be home.”

During the speech, he shared inspirational words about his time as a student at Howard, running the New York City Marathon in 2003, and even quoted the late Notorious B.I.G.

“Howard University didn’t just change my life—it entered my soul, my heart, my being, and my spirit,” he said.

Despite some backlash from Howard students, he received a standing ovation and “Diddy” chants from the Class of 2014.

“Of all the amazing moments God has blessed me with, this has to be one of The Greatest! Thanks You Howard University and The Class of 2014,” said Puff.

He was joined by “the love of his life,” his mother Janice Combs, and friends including will.i.am, Jermaine Dupri, French Montana, and Bow Wow.