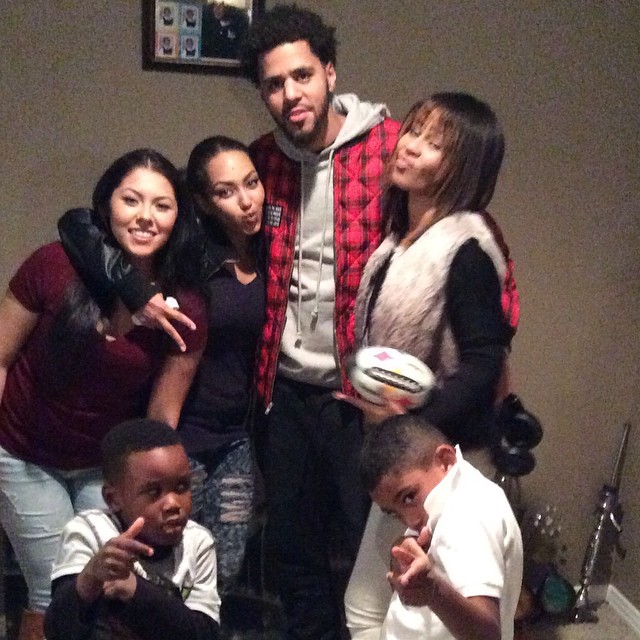 J. Cole is taking the grassroots approach with 2014 Forest Hills Drive. The Dreamville rapper surprised one lucky fan and played her his new album nearly three weeks before its release.

On Wednesday, Cole tweeted that he was in Dallas and one fan named Dalia responded. Much to her surprise, Cole wrote back and asked her to DM her address so he could come play her the album.

Send me DM with your address I'll come play u the album. @DaliaDk “@JColeNC: Dallas we hereeeeee” we gotta see you tonight

Cole surprised her with a house visit and gave her a first listen to his third album through headphones. He made himself at home, kicking back on the couch, while Power 106 host Rikki Martinez captured the moments on Instagram.

“I don’t don’t even know where to BEGIIIIIINNNNNNN … OMGGGG.. COLE WAS AT MY CRIIIIIIIBBBBBB!!!! Aaaaaahhhhhhh. ..for a private listening session of his new album dropping DEC 9th #2014ForestHillsDrive and you guys are IN for a TREATTT!!! I freakin LOVED it, you feel them in your soul!!! We always do, but you’ll understand when you hear it!!!!! This one is SPECIAL …THIS JUST HAPPENEDDDDD AAAAAHHHHHHH!!!! You guys KNOW how I feel about Cole…I told em he’s not even a “celebrity” he’s fam!!!!! And THE MOST HUMBLE SOUL EVER!!! Thank you @realcoleworld @kingofqueenz25 .. This literally made my LIFE!!! Aaahhhhhhh no matter what I say, I’ll never be able to explain…….. Man!!! I swear my dude is legendary!!! WHO TF DOES ISH LIKE THIS??!! That’s why I ride with him the way I do… AAAAAAHHHH”

Her young nephew also took the opportunity to show off his rap skills by spitting some 2Pac for Cole, who clapped in approval. The Roc Nation MC even got in a round of PlayStation with the young fans.

While Dalia is one of the lucky few to hear 2014 Forest Hills Drive, the rest of the world will have to wait until the album’s release on December 9.

Cole also plans to host two listening sessions at his childhood crib in Fayetteville, North Carolina on November 29 and 30, where he will play the album for fans and neighbors.

will my son Amir remember playing playstation with 1 of the all time greatest rappers!!?#myhome @ColeNation @JColeNC pic.twitter.com/z5uqBKy1UL

THANK YOUUUUUUUUU. @JColeNC @KingOfQueenz @Dreamville This was beyond anything I could've ever imagined. WOW AHHHHH pic.twitter.com/5IEapjurMN