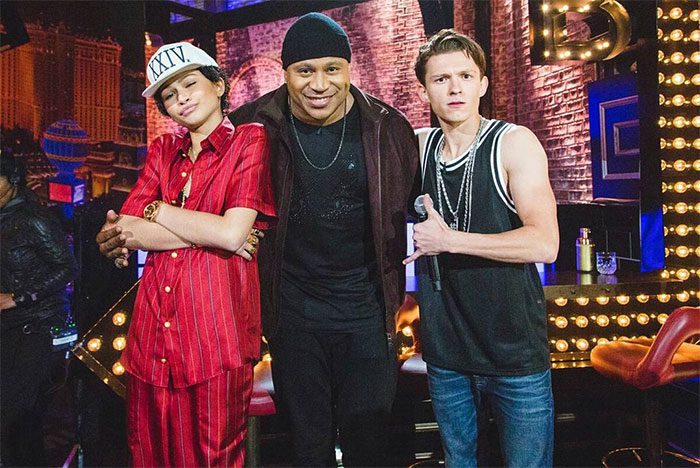 Put your pinky rings up to the moon. Zendaya kept it player while covering Bruno Mars during a “Spider-Man” edition of “Lip Sync Battle.”

The actress-singer, who’s set to play Michelle in this year’s “Spider-Man: Homecoming,” faced off against her co-star Tom Holland. For her first performance, she opened with a soulful and sassy rendition of Erykah Badu’s “Tyrone,” for which she rocked ‘locks and a head wrap. Meanwhile, Tom — who stars as Spider-Man in the new film — opted for a jersey, some chains, and a rendition of Nelly’s “Ride Wit Me.”

Backed by her own Hooligans, Zendaya took over the battle from there, channeling Bruno Mars for “24K Magic.” Rocking a silk shirt, shorts, and a “XXIV” hat, she busted out some funky moves and made it rain during her explosive performance.

But Holland had a trick up his sleeve for round two, where he performed Rihanna’s “Umbrella.” With rain falling on him, he launched into an acrobatic set, while dressed like RiRi in her classic Good Girl Gone Bad video.

That might have done the trick for Holland, who was also making his American television debut. After winning the championship title, the newest Peter Parker joked: “It’s an honor. One of these belts, I’d like to have for fighting, but ‘Lip Sync’ will do.”

Zendaya concurred. “This was so much fun,” she said. “Just doing this, being able to do whatever, and you guys giving us so much love, it’s so cool. Tom, you killed it. That was so dope.”

The show is about more than just competition. It’s also about laughs and, sometimes, love. In between scenes, co-host Chrissy Teigen found time for some fun with the superhero theme, coming down from the ceiling for a “Spider-Man” kiss from hubby John Legend.

Zendaya Stars in Bruno Mars' 'Versace on the Floor' Video