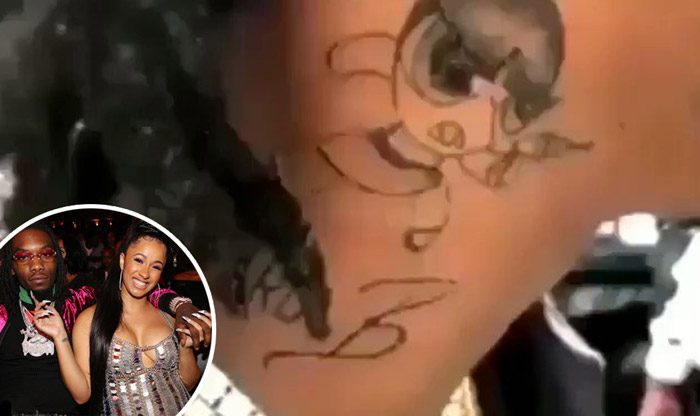 Offset Gets Cardi B Neck Tattoo

Offset will be now able to party with Cardi anywhere he goes, thanks to a new tattoo on the side of his neck.

The new ink features Cardi B’s name sprawled under Buttercup from “The Powerpuff Girls.” It’s an ode to one of Bardi’s favorite cartoon characters, which she also commemorated with an iced-out pendant, as seen in the “MotorSport” video.

Are you feeling Offset’s Cardi B neck tattoo? pic.twitter.com/SpSB7vWGQU

Offset and Cardi are engaged, but the two have been fielding infidelity rumors for the past few months. Bardi seemed to confirm those talks with an onstage warning. “Do that shit again and you gon’ lose your wife,” she said last month.

Recently, however, she revealed that the two still plan on getting married. She even shared her potential song options for their first dance. “I don’t know what song he’d pick,” she said. “I know the one that I would pick. I’m not gonna say it because I’m not gonna sound sensitive. It’s between Al B. Sure! and Grace Jones.”

Success has also followed the pair. Currently, Bacardi is on seven Hot 100 singles, while Offset pops up on four. The power couple appears together on Migos’ “MotorSport,” which is sitting at No. 8.

Up next, Cardi is crafting her debut album and is set to perform “Finesse” with Bruno Mars at the Grammys. Meanwhile, Offset is finalizing work on Migos’ Culture II.