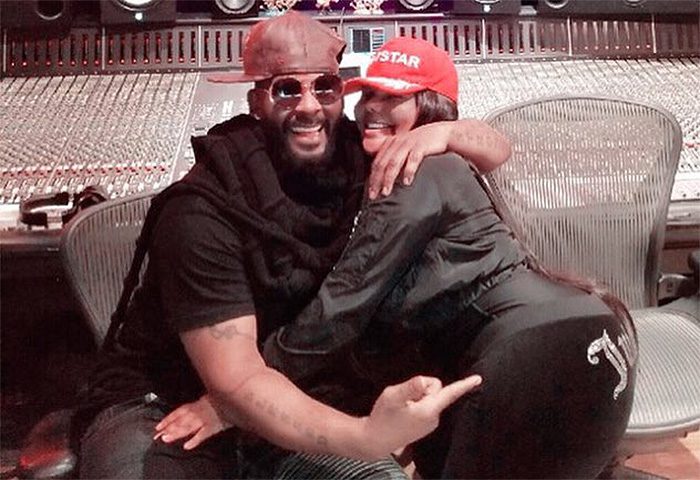 Nearly 20 years after dancing together in the video for “Feelin’ On Yo Booty,” Lil’ Kim and R. Kelly rekindle their connection. Now, Kim and Kellz are teasing a “legendary” collaboration after linking up for a studio session.

Taking to Instagram, the Queen Bee revealed: “Yup the secret is out 🙊 What went down last night was legendary 🔥 Stay tuned!!!”

The R added: “Looks like the secret is out! Studio time last night with @lilkimthequeenbee ! Would y’all be down for a #KimNKellzcollab?”

Yup the secret is out 🙊 What went down last night was legendary 🔥 Stay tuned!!! pic.twitter.com/wkuMdjpqFC

Kim and Kellz have history together. In 2000, Kim was a prominent figure in Kelly’s “Feelin’ On Yo Booty” video, which also featured Nelly, Fat Joe, and DJ Khaled. Two years later, the duo reunited once again on “Shake Ya Body” off Kelly’s JAY-Z collaborative project, The Best of Both Worlds.

It’s unclear where the collaboration will land, but Lil’ Kim has been putting in work. In November, she released “Took Us a Break” and teamed up with Remy Ma for “Wake Me Up.” Last month, she also shared a photo with Chris Brown and Remy, which she captioned “just wait on it.” The Queen Bee’s next album, due this spring, will be her first since 2005’s The Naked Truth.

R. Kelly spent much of last year battling a series of allegations, including underage sex and physical abuse. He also denied a report that detailed a cult-like environment, where women are mistreated, yet another allegation in a long line of misconduct accusations against the superstar singer.