Azealia Banks Blasts 'Wild 'N Out' for Making Her Cry

Azealia Banks was left in tears after a taping of “Wild ‘N Out.”

The Harlem rapper reveals that she was invited to perform on Nick Cannon’s sketch comedy and improv show for MTV, but the experience turned out to be a nightmare. Instead, she says she was complexion shamed by the cast during a freestyle battle, which she didn’t plan to participate in.

“I did Wildin’ out today. There were tons of pre-planned colorist jokes and of course …. cry baby cried,” she wrote on Instagram.

According to Banks, one of the cast members started insulting her looks, including the color of her skin. “Some little scrawny black Atlanta twink was prepared for me,” she said. “They planned this – hit me on short notice, told me I didn’t have to participate in the coon ass freestyle battles ,(not my style) and I was to sing my song and go home.”

The clowning continued as other members of the cast joined in. “I show up and some guy who’s darker than me starts calling me ugly and being colorist, then all of a sudden a choir of the most disgustingly basic, local, cattle call ‘urban’ pseudo comedic ‘FAT BECause You sit in a chair all day’ greasy soul food induced south of the mason Dixon ,self hatred. Ass It#backwards, post-Jim crow , post traumatic slave disorder true self esteem less, Ward of the state CLOWNS with their low scale and highly UNimpressive resumes, start going off about how the beautiful Azealia Banks looks!”

An emotional Azealia was angered by the incident and her alter ego “Yemaya” came out. “I’ve never felt so much hate and rage for anyone else than I did in that moment. Yemaya was really on stage,” she said.

She detailed more of the account on Instagram Stories, explaining that no one came to her defense. “Not a single one of those black men called ANY of the white women on stage ugly,” she said. “I’m sorry…but yesterday was a testament to why I don’t ever let ni**as near me.” 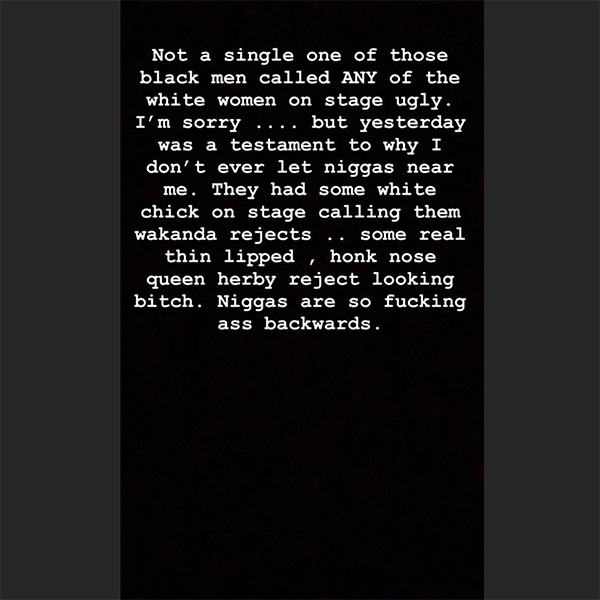 Banks is promoting her new single “Treasure Island” and upcoming album Fantasea II: The Second Wave, due later this summer.