The “Press” rapper was headlining the Bonnaroo Music & Arts Festival in Manchester, Tennessee on Sunday night (June 16) when she suffered an unexpected wardrobe mishap. Just a few songs into her set, her colorful beaded jumpsuit ripped in the middle, revealing her butt.

But Cardi didn’t let it deter her. She quickly left the stage after announcing the malfunction, trading her skintight bodysuit for a white bathrobe over a strapless nude bra. 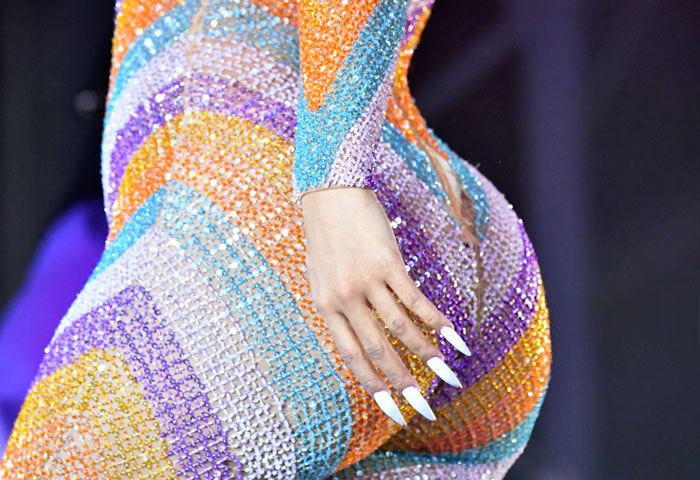 Cardi finished off her 45-minute set, which featured her biggest hits including “I Like It,” “Money,” and “Bodak Yellow,” vowing to “keep it sexy” in her robe.

Ugh a fucking QUEEN!! 😩😍 she really did that shit even with a wardrobe malfunction she really is THAT bitch. I’m even more obsessed after seeing her in concert. I stan forevaaaa bitch and fuck y’all if you talking shit about her 😈😩😍 @iamcardib #Bonnaroo #cardib pic.twitter.com/jCEJLwBwwc

Bonarroo marked Cardi’s return to the stage after canceling a few shows due to complications with her recovery from liposuction and breast augmentation.

“You know, I hate canceling shows because I love money,” she previously said during an Instagram Live session. “I’m a money addict, and I get paid a lot of money, a lot of money for these shows … like I’m canceling millions of dollars in shows.”

Last week, Cardi revealed plans to hit the gym to avoid having to get surgery again. “I been working out for the past 2 weeks cause bitch I ain’t getting surgery again,” she said, adding, “But let me tell you I haven’t got a headache ever since.”

I been working out for the past 2 weeks cause bitch I ain’t getting surgery again😂😂😂but let me tell you I haven’t got a headache ever since .