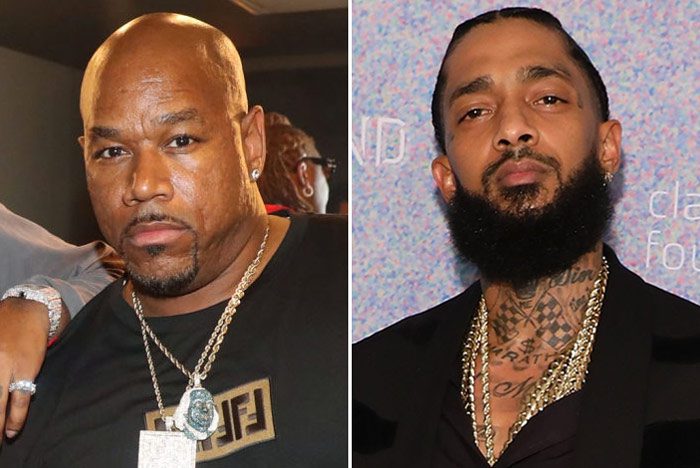 J. Roc reportedly punched Wack several times in the face before taking off during Game’s set at Rolling Loud in L.A. on Sunday night. Video of the aftermath, obtained by TMZ, shows venue security having to restrain Wack from going after J. Roc backstage at the festival.

Whooping Wacks ass takes more than words it takes a action ! Glad to see I still control the narrative….

Earlier this month, Wack, who also manages Blueface and Ray J, stirred controversy when he said that Nipsey was not worthy of being called a “legend.”

“How many albums did Nipsey drop? One album. This not no personal shit I’m talking about. It’s just real shit,” he told TMZ. “The man died with a million followers, no radio hits, no platinum hits, right? No world tours, right? After he died, he went platinum, sold a bunch of records, followers went up 9-10 million. We gotta define what a legend is and what a legend ain’t.”

Nipsey’s friends including Meek Mill, Mustard, and T.I. took to social media in his defense. “Record sales and #1 hits ain’t the only barometer for legendary status,” wrote Tip.”IMPACT is what’s important. Although his notoriety DID grow exponentially more after his demise… his impact is undeniable.”

In the wake of Nipsey’s death in March, J. Roc announced his retirement. “I got the Babies and L forever I’m done with all this Shit I retire from being a bodyguard I love you HUSSLE THA GREAT,” he wrote in his heartfelt tribute.

Never in a million years I thought I would be writing some shit like this … we haven’t made a 100 Million yet … we was suppose to grow old and I call u big nose shoot jokes on you all day… but instead I’m here in tears writing this I wish I was there I would switch places with you any day the world need you here I’m so confused , lost , hurt I lost a brother , best friend, a mentor all I can here you saying now is If it was me, I would tell you, "Nigga, live your life and grow" I'd tell you, "Finish what we started, reach them heights, you know? And gas the V-12 to the pipe and smoke" but it sounds way easier then done … I got the Babies and L forever I’m done with all this Shit I retire from being a bodyguard I love you HUSSLE THA GREAT