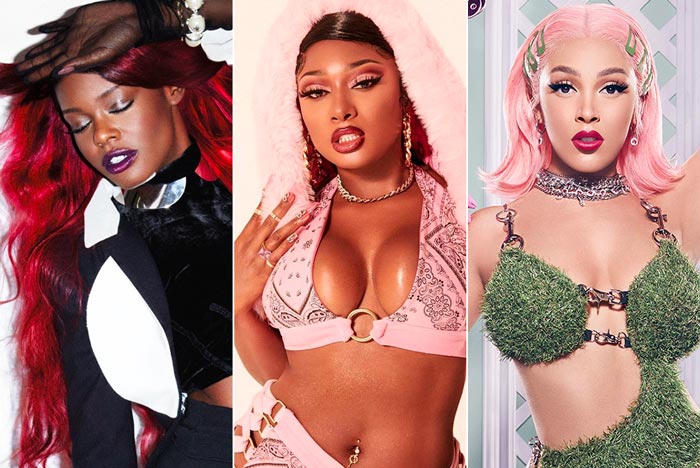 Azealia Banks is at it again.

The Harlem rapper is stirring up more controversy with her latest body shaming attacks on Megan Thee Stallion and Doja Cat.

Taking to Instagram on Tuesday morning (Jan. 12), the “212” hitmaker posted videos of herself watching Meg’s BET Awards performance while hurling insults at the screen.

“Look at this fat girl, heavy metal and reflective shit,” she said, commenting on Meg’s outfit. “I’m sorry, Megan Thee Stallion, you look like a fu**ing fat cow. This bullshit Kesha, Fantasea… Too much meat. Oh no, Meg, you’re getting fat.”

She continued to laugh at the screen while mocking Meg’s weight. “Fat girl with the fat shit,” she added. “No, Meg, no. Eww with that gut.”

In her caption, she spewed more vitriol at the Grammy-nominated rapper: “@theestallion you need to be stopped right in your tracks sis. You look horrible.”

In another video, Azealia commented on Doja Cat’s “cellulite” and “old white lady face.” “This bitch is disgusting,” she said while watching Doja’s “Juicy” music video. “The face look drunk and tired and lazy.”

Added Banks, “I don’t give a f**k about this body positivity bullshit. This is disgusting.”

She had even more vile things to say in her caption. “No doja cat is an actual disgusting white woman abomination,” she wrote. “If we gave tinashe are hard time to just let flabby ass pre diabetes doja cat come thru and eat the biracial beauty standards. We have to do better as a culture.”

She received backlash from her followers, who chided her for the disrespectful remarks. “You have so much potential, but body shaming and bringing other women down ain’t the moves,” wrote one fan, while another added, “Instead of focusing on your music this is the energy you are choosing as a fan your work this is disappointing.”

Azealia remains a controversial figure, having attacked many of her peers including Beyoncé, Cardi B, and Nicki Minaj.

Back in September, she had fans concerned for her well-being after sharing suicidal thoughts. “This pandemic, extreme lack of social interaction, no intimacy, combined with constant public ridicule is making life harder than its worth,” she said.