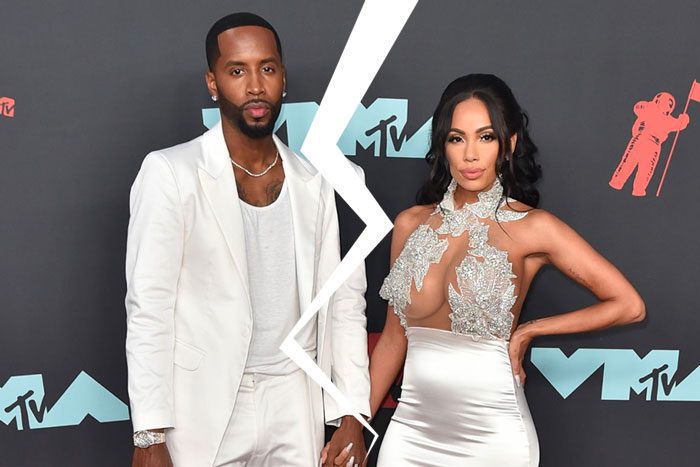 It’s over for Safaree Samuels and Erica Mena.

Less than two years into their marriage, the couple is getting a divorce. Mena officially filed to end the marriage last Friday in Fayette County Superior Court in Georgia, just weeks after announcing that they were expecting their second child together.

According to divorce documents, obtained by TMZ, the “Love & Hip-Hop” star is asking for primary physical custody of their 1-year-old daughter, Safire, but she’s willing to share joint legal custody with Safaree. She is also seeking child support, plus exclusive use of the home they currently share.

Erica is currently pregnant with the couple’s second child. Over the weekend, Mena posted a pregnancy photo and she was not wearing her wedding ring. She and Safaree haven’t been photographed together in quite some time.

The couple has had their ups and downs, which have been documented on “Love & Hip-Hop” and social media. In November, Safaree hinted that he and his wife were headed for divorce. “BACHELOR‼️ Ending 2020 right ‼️” he captioned one photo while tagging “Divorce Court.”

Oop Safaree says getting married was one of his biggest mistakes 👀 pic.twitter.com/Zva9jVcUix

In a since-deleted tweet from February, Safaree also called getting married one of his “biggest mistakes.” “I mean this from the bottom of my heart getting married was 1 of my BIGGEST mistakes and it will never happen again,” he tweeted. “I’m walking away before I end up in jail over some dumb shit. Nobody is worth my freedom!!!”

Samuels, 39, and Mena, 33, started dating after meeting on the 2017 VH1 series “Scared Famous” and married in October 2019. The following February, they welcomed their daughter Safire.