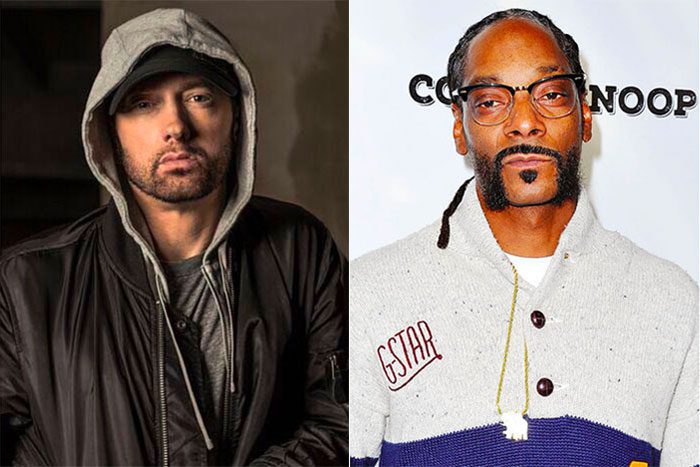 After going back and forth last year, the two are leaving the beef in the past.

Their so-called feud started last July when Snoop omitted Em from his top 10 favorite rappers list, telling “The Breakfast Club” that he could “live without” the Detroit rapper’s music. Em clapped back at Snoop for “doggin'” him on his Music to Be Murdered By: Side B cut “Zeus,” prompting Snoop to respond, “Pray I don’t answer that soft ass shit.”

But weeks later, Snoop revealed that the two were back on “good” terms, and now Eminem is addressing the status of their friendship.

On the remix to “Killer” with Jack Harlow and Cordae, which dropped Friday, Slim Shady confirmed that they spoke and squashed their beef.

Snoop also acknowledged the song by reposting it on Instagram Stories.

In a recent interview, the West Coast rap icon revealed that he wants to play the halftime show at next year’s Super Bowl with Dr. Dre, Kendrick Lamar, 50 Cent, and Eminem.

“I’m available, Dre’s available, Eminem’s available, Kendrick Lamar, 50 Cent — whoever Dr. Dre wants to pull out of his hat to make this thing a professional event and make it big and the biggest effort they can have,” he told Yahoo! “It’s just a matter of the NFL pulling the trigger.”