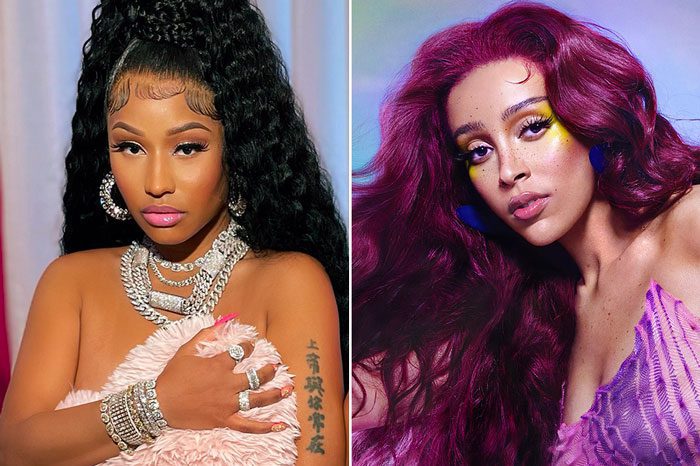 Nicki Minaj and Doja Cat topped the charts with 2020’s “Say So (Remix),” but their second collaboration never came to be.

During a Twitter Spaces chat, Nicki revealed that she was asked to feature on Doja’s album Planet Her. She was sent two songs, including “Get Into It (Yuh),” but she and Doja were unable to properly connect the same way she and BIA did for the “Whole Lotta Money (Remix).”

“It’s not that I’m too busy at all. It’s just that there were middle people involved in that situation so I had told her,” Nicki explained. “If it was like how me and BIA were direct and we dealt with each other directly, it would be different.”

Nicki Minaj revealed she was asked to hop on Doja Cat’s “Get Into It (Yuh),” but felt she couldn’t do anything for the song… 👀🤔 pic.twitter.com/SXeFwori7U

Nicki says it also came down to song selection and she just wasn’t feeling it. “I didn’t love that song because I didn’t think I could bring anything to it,” she said of “Get Into It (Yuh).” “So I asked them to send me something else…I think that was the second song they sent me, but I asked them to send me something else. And they didn’t send me anything else.”

In a previous Instagram Live, Doja hinted that Nicki was supposed to be featured on an unnamed track off Planet Her. “I was supposed to get a feature on that song and it didn’t happen because I think the song wasn’t giving what it needed to give.”

However, she still paid tribute to the Queen on “Get Into It (Yuh)” by shouting her out and referencing lyrics from her 2010 debut single “Massive Attack.”

“Thank you, Nicki…I love you / Got that big rocket launcher,” Doja says at the end of the track.