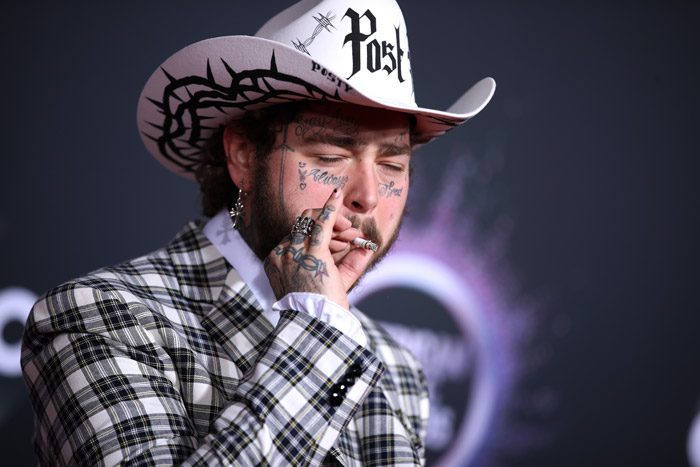 Post Malone Says He Smokes Up to 80 Cigarettes a Day

While promoting his new album Twelve Carat Toothache, the “Cooped Up” rapper paid a visit to the “Full Send” podcast, where he revealed that he smokes up to 80 cigarettes per day.

“How many darts a day do you rip on average?” asked one of the hosts.

Malone said he smokes 40-45 cigarettes per day on average. “By the time I open that third pack, I’m a total piece of shit and I need to go to sleep,” he said.

But he admitted that the most he’s ever smoked in one day is “probably like 80.”

When asked if he’s worried that the cigarettes will mess with his voice, he said, “Yeah, it definitely has. But I mean Johnny Cash smoked his whole life. He sound cool.”

While he smokes cigarettes daily, he has stopped smoking weed. “I used to smoke weed a lot,” he said. “And then one time, I just got some wild stuff that I think was laced and then ever since, I haven’t felt the same.”

Post revealed that he’s a “terrible sleeper,” a result of his anxiety. “I’m super anxious all the time and then I wake up and I don’t feel good, like I don’t feel like a hundred percent. And throughout the day, I’m like, ‘Oh man, I’m so fu**ing tired.'”

During the interview, Posty also discussed his friendship with Justin Bieber, who he opened for on his “Purpose World Tour” in 2016. “He’s the best. What a lad,” he said. “I [didn’t] even have a record out and he was just so kind to me from the start. And I loved that.”

Twelve Carat Toothache, which features appearances from The Weeknd, Doja Cat, and Gunna, is expected to debut at No. 2 on the Billboard 200.