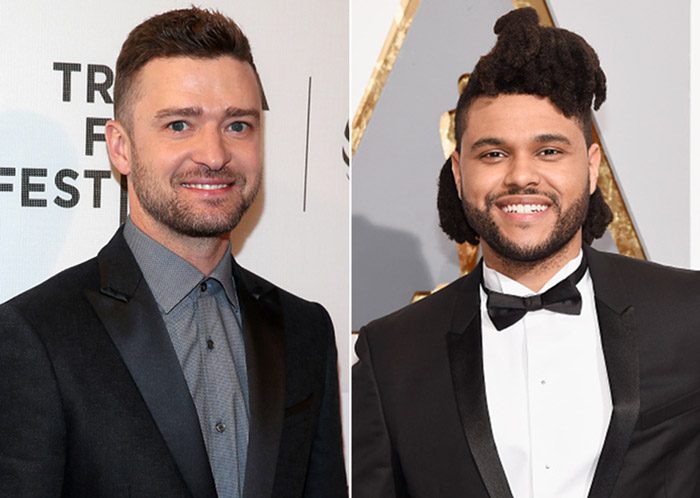 JT meets XO. Hot off the release of “CAN’T STOP THE FEELING!” Justin Timberlake has teased a powerhouse collaboration with The Weeknd.

Justin revealed the big news during an interview with BBC Radio 1Xtra, where he also confirmed that the Beauty Behind the Madness crooner is working on a new project.

“Abel and I have been talking,” he said. “We’ve been talking about doing a collab. He’s working on an album. I don’t know if I was supposed to say that. Did I just mess up something? He’s always in the studio anyway. We’ve talked about doing something together.”

That isn’t all, of course. Timberlake has also written songs for Ariana Grande and Gwen Stefani for the Trolls soundtrack he’s executive producing. While he previously announced that, he’s now saying one of those could be a collab.

“There’s three or four other great songs that are on the soundtrack that we wrote,” he said. “Ariana Grande does one and Gwen does one that I think I’m actually gonna feature on with her. I think it might be a duet.”

But before those songs officially drop, Justin teamed up with his Trolls co-star Anna Kendrick on Wednesday (May 11) to perform another cut off the soundtrack, an acoustic cover of Cyndi Lauper’s “True Colors.” “We are Anna and Garfunkle,” he joked, before their performance of the track at Cannes 2016.

With all of these collabs in store, Timberlake is also working on his own album, a follow-up to 2013’s The 20/20 Experience. Gearing up for this release, he’s been hitting the lab with Pharrell and Timbaland.

Justin Timberlake Performs 'Man of the Woods' Medley at BRITs