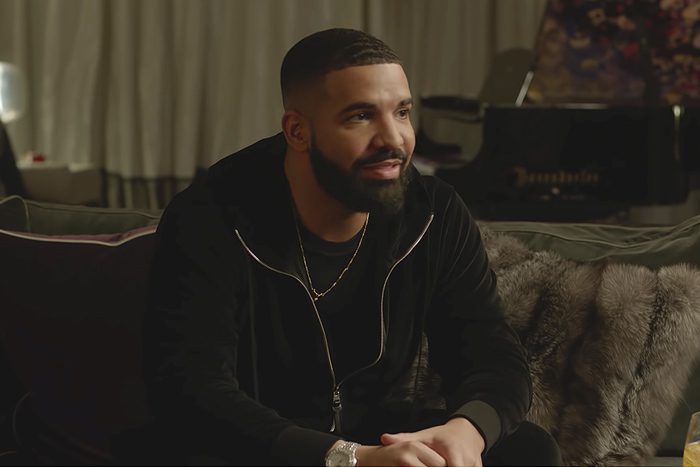 Drake is sounding off.

Just days after dropping his “War” freestyle, the 6 God sat down with Elliott Wilson and Brian “B.Dot” Miller at his new multi-million-dollar Toronto mansion for the latest episode of TIDAL’s “Rap Radar” podcast. During the two-hour-plus interview, October’s Very Own discussed everything from ghostwriting accusations to working with Chris Brown to his beef with Kanye West and Pusha-T.

“He’s just made an entire career off of it,” said Drizzy (via Complex) when asked about his rivalry with the Daytona rapper. “Some people like his music, I personally don’t ’cause I don’t believe any of it. And I like to listen to guys I believe.”

He said Pusha’s drug-dealer rhymes don’t appeal to him anymore. “You just get to peak behind the curtain too,” he added. “When I was whatever, 16, thinking that he was the biggest dope dealer in the world serving bricks to all, every corner of America, yeah sure… I was… a fan obviously more so just a fan of Pharrell and The Neptunes. I always wanted to be signed to Star Trak and stuff like that, that was the wave. Now that I’m grown-up, and I know him and the truth, it’s just not as appealing.”

When asked about a potential reconciliation, he said he has “no desire to mend anything with that person” and there was “no turning back” once it got personal. “I sleep well at night knowing I didn’t get out-barred,” said Drake. “It was just, you know, he told the world that the biggest artist at the time has a kid that he hasn’t told you about. I knew kind of, for me, it was over at that point. It wasn’t even about battle rap.”

He still believes Kanye is behind his beef with Pusha. “That’s where all of this stems from,” he said. “It’s all rooted in that situation, yes. I think that he definitely recruited a guy with a similar dislike for me no matter what he says in interviews. I know that… There’s something there that bothers him deeply and yeah, I can’t fix it for him.”

However, despite their bad blood, he will always have respect for Kanye as an artist. “He’s still my, obviously with the exception of Lil Wayne… and if I look at Hov as the guy who truly shaped the majority of my thinking, skill set, all those things, Kanye West would be my favorite artist all around,” he said. “And that’s just facts. I have no problem saying that… Things have changed. I’m not just some kid that’s a fan anymore. Now we have personal situations, and like I said, a lot of his issues with me, I can’t fix them for him.”

Drake confirmed that his lyrics on Travis Scott’s “Sicko Mode” were directed at Kanye (“I can’t lie to you. Of course they were”), but he has no interest in repairing their relationship. “No, not really because it’s just not on my end. I have no problem with any of these guys, I don’t even know these guys like that.”

On “The Story of Adidon,” Pusha claimed that Drake was planning to reveal his son as part of his deal with adidas, which Drake denies. “I wasn’t… At the time I was working with adidas and we were toying with the idea of a name being a play off of… my son’s name. I wasn’t revealing my son with adidas, like I wasn’t gonna have my son in the fucking…”

When asked why he didn’t reveal his son to the world sooner, Drake said it was because of an inconclusive DNA test. “To be honest with you, I did a DNA test for my son and it came back to us and it said the DNA test got ruined in transit and they couldn’t be 100 percent sure that that was my son or not,” he said. “So, I was in a really weird pending situation where I didn’t want to go tell the world that that was my son and it wasn’t.”

While he has unresolved issues with Pusha and Kanye, he and JAY-Z were able to sit down and talk it out. “I think JAY has respect for me and he’s aware of the massive respect that I have for him at the end of the day.”

The topic of Chris Brown also came up. Drizzy and Breezy reunited on their platinum hit “No Guidance” earlier this year despite their past relationships with Rihanna.

“That person that was in the middle of us is no longer a part of either of our lives currently and I have the most utmost love and respect for her,” said Drake of RiRi. “I think of her as family more than anything. I felt, I actually had kind of a moment of hesitation before because I didn’t want her to ever feel disrespected by me linking up with him.”

But he’s in no rush to release the follow-up to Scorpion. “I’ll go like three weeks in between making songs, just because like I’m just kind of enjoying life,” he revealed. “I’m enjoying living, going out with people. Investing in personal connections, and it’s just making my music better.”

While he didn’t go into too many details surrounding his next album, he hinted at a lengthier release to appease his diverse fan base. “I have to do two things every album. I have to give the people that like to hear the singing enough to hold on to, and I have to give [Le]Bron enough bars.”

He and The Weeknd recently mended ties and he holds no ill will for him not signing to OVO. “To this day, I’m always excited, always super happy for all those guys. And I never had any resentment toward, like, ‘You didn’t stay on OVO.’ I’m not gonna say there weren’t people that didn’t feel a way about it, but that was never my… Like my thing, I never expected Abel to stay on OVO.”

While he regrets their past (“I have my fair share of shit to apologize for, as does he. We’ve obviously had our bumps in the road”), he has high hopes for the future (“OVOXO still could have been a thing, and still will be a thing, by the way”).

Elsewhere in the interview, he once again denied ghostwriting accusations (“Anybody that knows me knows that my strongest talent is writing… That’s why people ask me to write songs for them”) and confirmed that he’s no longer signed to YMCMB (“I’m just signed direct myself to Universal”).

He also addressed being booed at Tyler, the Creator’s Camp Flog Gnaw Carnival. “I just walked myself into a situation, I kind of felt it backstage too,” he said. “I was a little confused. I was kind of sitting there, going like, ‘You guys know Frank’s not here, right? You may as well get over that… let’s rock, I’m the guy, I’m the replacement. I got a couple joints if you wanna hear them.'”

Plus, he opened up about his love life and what he’s looking for in a relationship. “I love my space, I love my work, and I love my routine. And for me to break that for somebody, it would just have to be a really special person that fits into that puzzle, and that is supportive of the things I’m doing,” he said. “It’d have to be somebody that I get along with so much to the point that when we’re separate, I’m feeling like I can’t function properly without their presence. I have come across it a few times, I’ve yet to be able to hold onto it, for whatever reason.”