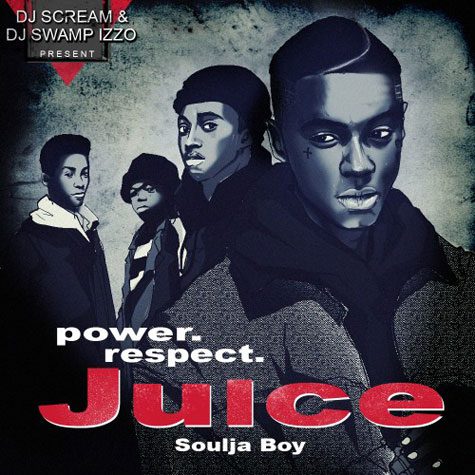 Soulja Boy has people talking once again with his latest project. The 20-year-old rapper is reprising Tupac Shakur’s role in the 1992 crime drama Juice. The remake, directed by Rage (“Crank That” and “Kiss Me Thru the Phone”), was inspired by his mixtape of the same name and is currently shooting in Atlanta with an ensemble that includes Waka Flocka Flame and Cam’ron.

Soulja doesn’t plan to flip the script too much, staying true to the original. “It’s basically the same thing. It’s just 2011,” he tells staging-rapup.kinsta.cloud. “We’re gonna do it the right way, give the people something to look forward to, and just keep it positive.”

Find out how his Juice-like haircut sparked the mixtape and movie, why he cast Waka Flocka, and what he says to those who criticize his decision to recreate the classic in our exclusive Q&A.

How did the concept for the Juice mixtape come about?
I was at my condo in Los Angeles, just chillin’ one night watching this Juice movie, and I was like, “Man, Tupac, he was like real huge and so turnt up in the movie.” I was like, “Ain’t nobody in the rap game got their hair cut like that right now.” So it just started off as me getting the Juice, how Tupac did, high right, low left. I called my barber up like, “I wanna get my hair cut like the Juice cut,” so he cut it. Then after that it just really inspired me to make the music, and then one thing lead to another. I hooked up with DJ Scream, hooked up with DJ Swamp Izzo—now the mixtape’s everywhere.

Have you always been a Tupac fan?
Yeah, ever since I was younger.

Let’s talk about the film. How far along is it?
We’ve been filming here in Atlanta. Waka Flocka’s gonna be in the movie. It’s gonna be crazy. He called, he reached out. We met up with the director. Now I’m almost to the stages where I just gotta finish these last three shoots and then I’ll be cool.

Why did you decide to put Waka Flocka in the film?
I think it was a good idea to bring him on board because the director was trying to get me to put some rappers in it, and he was naming a lot of different rappers. I just felt like if I was gonna put anybody in the movie, it should make sense and be somebody that I really got a relationship with in the rap game, for real.

Is Cam’ron also going to be involved?
He reached out to the director Rage. They have a relationship, so he still gonna play a part in the movie. That’s gonna be big. It’s me just being a young, black male in this industry. I’m just tryna do something new, do something creative, have a spin on things—just think outside the box and give my fans something to look forward to. That’s what this whole thing is about.

Where and when will the movie premiere?
I don’t have an exact date yet, but I know that it’s gonna be big. I have a lot of different options to choose from on how I want to premiere it. I know it’s gonna be on BET for sure.

How do you respond to critics who say you shouldn’t remake Tupac’s movie?
Man, I’m a Tupac fan. I respect Tupac. It’s nothing like that. I would never try to disrespect Tupac—ever. It was just an idea that I had for a mixtape. The movie is just a movie… You had Game who was in Belly 2. You had a lot of different rappers that were in a lot of different movies. I think they’re saying that just ’cause of who I am, it’s Soulja Boy.