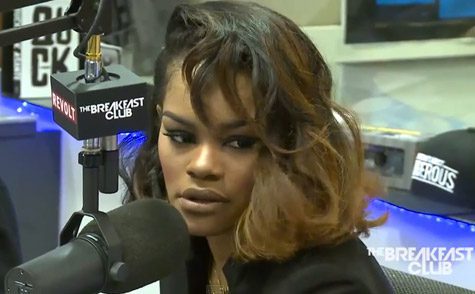 Teyana Taylor had a lot to talk about when she stopped by Power 105’s “The Breakfast Club” on Wednesday to premiere her new single “Maybe” featuring Pusha T and Yo Gotti.

Charlamagne Tha God, Angela Yee, and DJ Envy grilled her about her relationship with ex-fiancé Brandon Jennings and his new girl, Tae Heckard.

She doesn’t regret giving up her virginity to the Detroit Pistons player, but does feel betrayed by Heckard, who used to be her close friend. And don’t expect a reconciliation between the girlfriends. “Absolutely not. That’s gross,” said Teyana.

She also talked about her BET scripted series “The Start Up” co-starring Diggy Simmons, her long-awaited album, and the constant “What does she do?” questions.

“I have 50 records that I technically can’t put out,” she said. “I do a million things, but have out music.”

But now she’s ready to silence her haters (she saves screenshots of mean tweets) with the release of “Maybe,” which officially drops on May 13.

Plus, hear what she said about her infamous feud with Rihanna that caused her to lose her adidas sneaker deal, and how Beyoncé has kept her motivated with her words of encouragement.

On her ex-fiancé Brandon Jennings: “I was disappointed ’cause I felt betrayed because of everything that we’ve been through on and off for six years. … I will support you from a distance. I’m truly happy for Brandon.”

On losing her virginity to Jennings: “I got a ring two years before I gave up anything. I’m very proud of that.”

On whether she and Rihanna can mend their relationship: “I don’t know, but she did have a nice [Vogue Brasil] cover. I don’t gotta like her to like the cover.”

On posting the bloody photo of Rihanna post-assault: “I do apologize to any woman that feels like that’s what it was ’cause that’s not what it was.”

On Chris Brown: “He’s doing good, man. He’s in good spirits. When he get out, he gone be good. He’s not in there bitter and harping. He’s becoming a better man.”

On Beyoncé’s advice: “Me and Beyoncé had a long conversation when I went to her concert in Paris. She always acknowledges me no matter what she’s doing. She’s legit a fan of mine and she really believes in me.”