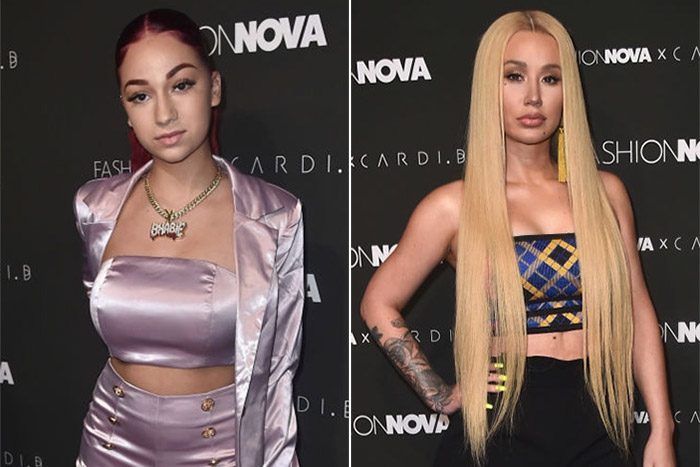 The 15-year-old rapper, whose real name is Danielle Bregoli, attacked the Aussie MC during the launch party for Cardi B’s Fashion Nova collection at Boulevard3 in Los Angeles on Wednesday night (Nov. 14).

Video footage, obtained by TMZ, shows the “Hi Bich” rapper throwing a cup of water in Iggy’s direction, soaking half of her blonde hair.

“U should come. Would be a good memory for u of what a sold out show looks like,” wrote Bhabie.

Following the drink throwing, TMZ cameras captured Bregoli on the street. “She was talking shit on Instagram so bitch you finna say something,” she said. “I ain’t worried about that bitch, I did what the fuck I had to do.”

Iggy also shared her reaction upon leaving the club. “I hope it wasn’t alcohol. She’s a little kid, she can’t drink, right?” she told a cameraman. Taking to Instagram Stories during the party, Iggy called out Bhad Bhabie. “Am I just going to have a half and half wig for the rest of the night?” she said. “What kind of ‘Jerry Springer,’ ‘Who’s Baby Is This?’ ‘Dr. Phil’ ass shit? Oh my God, I’m a grown up. I cannot.”

She claimed that she had Bhabie “removed” from the event by security. “Imagine me scrambling around the floor in a dirty night club trying to hit a teenage girl. Girl. NO. I’m grown and will simply have you REMOVED and continue enjoying myself,” she tweeted. “#YouNotSpecial. Anything else from her mouth is ignored — it’s too preschool for me.”

While driving home, Iggy addressed Bhabie once again. “I get that this little girl has made a name for herself acting a damn fool on television and online, but I’m a grown up. I’m not about to waste my energy on that shit, or be fighting a kid in a club,” she said. “I came to get a check. I left with a check. You left with your bag stuffed over there. And you look silly. I’m not going to be scrambling around on the floor for a 15-year-old girl on the internet.”

Bhad Bhabie clapped back on Instagram Stories. “Glad u left with a bag cuz u certainly ain’t making money from music anymore,” she wrote. “It’s simple. Don’t talk all sorts of shit on the internet n come up to me like u my friend. There is no beef wit Iggy Azalea as I was just told it’s not smart to beef wit no one that hasn’t had a career since 2014. Sending u a signed Bhad Bhabie poster in the mail as my apology. Send ur address to Atlantic Records.”

This is not the first time the two have beefed. Bhad Bhabie dissed Iggy on the remix to “Hi Bich” earlier this year. “Bitch don’t compare me to Iggy,” she raps on the track. “That old ho is washed and I’m lit / Wouldn’t pay her to wash up my whip / Bye broke bitch, bye ho.”