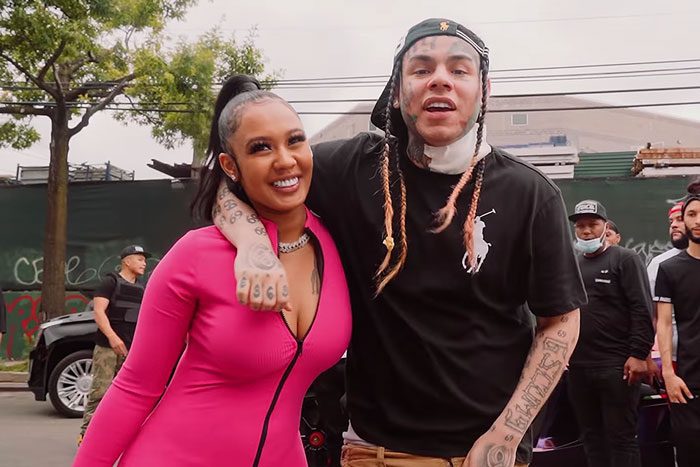 Is 6ix9ine about to be a father again?

The rapper’s girlfriend Jade is sparking pregnancy rumors with a post on social media. The model, whose real name is Rachel Wattley, posted a video wearing a hot pink jumpsuit and flaunting her body while playing Tekashi’s new song “PUNANI.”

It’s unclear if Jade is actually pregnant or just trolling, but her sister Baddie G seemed to confirm the speculation. “My nephew,” she commented alongside a series of heart-eye emojis.

Jade has remained loyal to Tekashi throughout his highly-publicized racketeering case. She visited him in prison often and even has tattoos of the rapper on her body. In January, she defended his snitching by saying that he had to do what’s best for him.

Tekashi completed his house arrest on Saturday and wasted no time hitting the streets. He shot a video for his new single “PUNANI” in Brooklyn on Sunday and released it online just hours later featuring a cameo from Jade.

“IM FREE !! … WHO SAID WE AINT OUTSIDEEEEEE,” he wrote in a post announcing the video. “BROOKLYN THIS MY TOWN NEW YORK THIS MY CITYYYY YOU HEAR ME!?!?! KING OF FUCKING NEW YORK YA COULD NEVA DO WHAT I DID AND BE OUTSIDE DUMMY!”