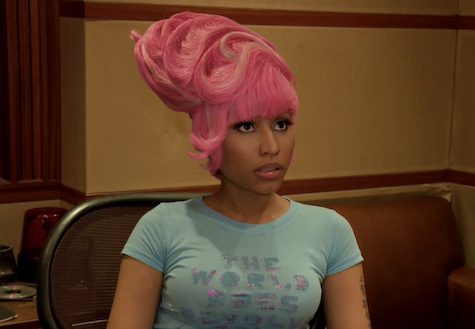 Nicki Minaj vents about getting served pickle juice in a clip from her MTV documentary “My Time Now,” airing Sunday at 10 p.m. After showing up to an unprofessional photo shoot where their budget isn’t up to snuff, the pink-haired rapper goes off about getting treated with the respect she deserves.

“I put quality in what I do. I spend time and I spend energy and I spend effort and I spend everything I have, every fiber of my being, to give people quality,” she barks. “So if I turn up to a photo shoot and you got a $50 clothes budget and some sliced pickles on a motherfuckin’ board, you know what? No. I am gonna leave. Is that wrong? Wanting more for myself? Wanting people to treat me with respect? You know what? Next time, they know better. But had I accepted the pickle juice, I would be drinking pickle juice right now.”

The Young Money spitter also addresses the double standards of being in control, comparing herself to Donald Trump. “When I am assertive, I’m a bitch. When a man is assertive, he’s a boss. He bossed up. No negative connotation behind ‘bossed up.’ But lots of negative connotation behind being a bitch. Donald Trump can say, ‘You’re fired.’ Let Martha Stewart run her company the same way and be the same way,” she states.