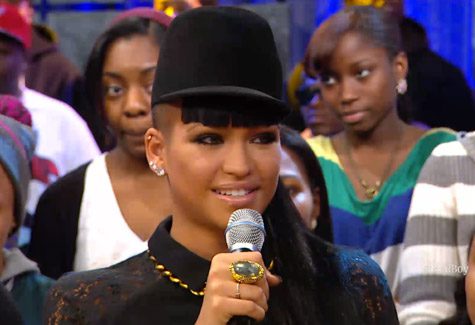 Cassie was back in black on Thursday’s “106 & Park.” Bad Boy’s sole female signee joined her label boss Diddy to premiere the trailer for her single “King of Hearts” and discuss the next chapter in her career.

Diddy explained how the model-turned-singer has evolved since the release of her self-titled debut in 2006. “She was just really thrown into the game with two smash records and a lot of times when that happens, you’ve got to catch up to your success,” he explained. “I think over the years we’ve put her through the proper things to make sure that she catches up to how big she is worldwide and can handle the pressure.”

While she may command attention for her beauty, that doesn’t stop her from working hard. “She’s not just a regular artist, she’s also a beautiful giving person and that’s the effect that she has on the younger generation and everybody that looks up to her,” added the Bad Boy mogul.

“She doesn’t let her natural beauty get in the way for her striving and hunger to be successful. She puts that work in and she’s definitely in the underdog situation. Trust me, on this album she gon’ show ya’ll what she got just like she did on the last album. Her swag is impeccable. To me, she’s definitely one of the baddest in the game.”

Cassie, who later shared the stage with her labelmates Machine Gun Kelly and French Montana, spoke about the video for her first single “King of Hearts.” “I shot it with [director] Chris Sims and he’s done a lot of rock videos in the past, so I wanted to try something different,” she said. “We shot it in Palisades Park on the way to Malibu in this beautiful mansion.”