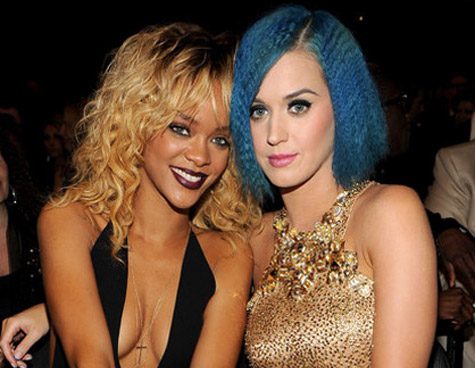 In addition to connecting with her former beau Chris Brown on the remixes to “Birthday Cake” and “Turn Up the Music,” Rihanna is eyeing a collaboration with her BFF Katy Perry.

“We have been working on this for years,” the pop starlet told “Access Hollywood” while promoting her film Battleship. “We still are trying to make a song together. She is one of my favorite musicians, as well as one of my favorite people in the industry. She’s very uncalculated, very sure of herself, and that’s something that’s very rare in this industry.”

But don’t expect a release anytime soon. “The song will probably come out in a while,” she added. “I won’t say it’s happening right now, but it’s gonna happen.”

Despite their busy schedules, the besties still try to find time to spend together. “We hang out. We have dinner or bachelorette parties. Whenever we’re in the same city, we try to do something, whether it’s see each other for five minutes for a hug or partying all night at some random after-party—we try to hang out as much as we can.”

RiRi, who has released six albums in six years, is not currently working on a new project. “I have not started working on new music,” she said. “I started working on the new sound, but I haven’t really started recording yet. This year, we kind of left a little room to play in other playing fields like movies, acting, fashion.”