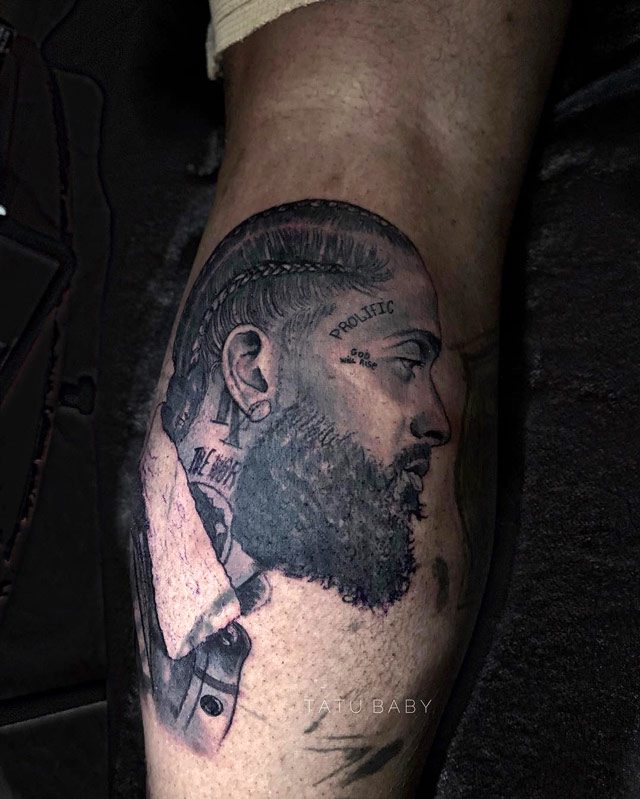 As hip-hop continues to mourn, the Maybach Music boss is paying tribute to the slain rapper with a new tattoo. Taking to Instagram Stories, Rozay showed off the fresh ink on the back of his leg, which features a profile of the late Crenshaw legend.

The tat was done by Katherine “Tatu Baby” Flores, who also shared a photo of the work in progress. “Life is not guaranteed, BUT THE IMPACT YOU MAKE IN PEOPLES HEART AND THE WORLD WILL LIVE IN HISTORY FOREVER!” wrote the Miami tattoo artist. “@nipseyhussle you did that and your legacy will live and burn brighter than the all hate and envy!” Ross also revealed that he was planning to shoot a video with Nipsey and Teyana Taylor for a new collaboration off his upcoming album Port of Miami 2: Born to Kill.

“Dam man I just had Nipsey and Teyana Taylor going over video ideas for our new joint on Port of Miami 2,” he wrote. “When news broke, Teyana called me in tears and total disbelief. I’m listening to this shit now in anger.”

Rozay and Nipsey collaborated several times on songs like “Mark My Words,” “A Hunnit a Show,” and “The Weather.” Ross even tried to sign Nipsey to his MMG label. “I was gonna do the deal when Ross put the MMG thing on the table,” Nipsey told Big Boy on REAL 92.3. “Just the terms and the way Ross set up [things], and the way the conversation started in that building, it was a great opportunity. It was a great situation. I just had a concern with my team getting credit for breaking Nipsey Hussle, so I didn’t necessarily want to take that from my team.”

While he didn’t take the deal, Nipsey had nothing but respect for the Bawse. “I would have took that deal,” he explained. “Even just outside of the terms, just how Ross hustles. I believe in Ross as a hustler. Everything he said and done, every convo we had, every time I sent a verse he executed it. So I got a lot of respect for Rozay, so I would have just done it off GP. But I got a team I committed to ahead of time, and I had to make sure they got the credit for what they did.”

Rozay isn’t the only one paying homage to Nipsey in ink. Cleveland Cavaliers star J.R. Smith also got a tattoo of the West Coast icon. The portrait was inspired by a photo shoot Nipsey did for Rap-Up’s Sound Bites last year.